The whale theme continues at the museum this week!

On 13 April 2016, we received a donation of the remains of a false killer whale from Underwater World Singapore (UWS). We are thankful for this generous donation and the support from UWS.

While news of the Singapore sperm whale has dominated the press since last July, little is known about Willy, the false killer whale that was stranded in Singapore more than two decades ago.

On 23 January 1994, two men who went crab hunting off Tuas spotted the whale, which they initially mistook for a shark. They alerted Underwater World Singapore (UWS) and the animal was identified as a false killer whale by UWS divers despatched to the site. 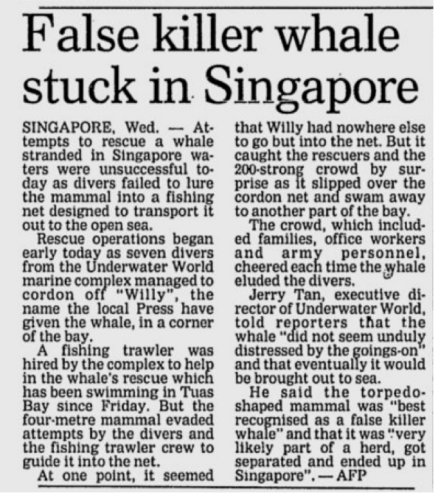 The Straits Times article about Willy’s stranding back in January 27 1994.

News of the whale stranding spread and captured the nation’s imagination. The whale was dubbed ‘Willy’ by the press after the highly popular 1990s film “Free Willy”, a stirring story about a boy who befriends a killer whale or orca called Willy—which was captured from the wild—and sets him free.

Rescue attempts to move the whale into deeper waters spanned a week but were ultimately unsuccessful. Willy later went missing on 29 January 1994 and was found dead the next day by some fishermen. The UWS then collected the body to conduct a post-mortem and solve some of the mysteries surrounding her arrival and death.

Autopsy and Preservation at Underwater World

As the autopsy was underway, it turned out that Willy was an old adult female, and not a young adult male as first presumed. The cause of death was also identified as a combination of infectious injuries, old age and severe trauma as a result of being trapped in the bay.

Separated from her group, with numerous puncture wounds on the left side of her body, these were probable factors that caused Willy to seek shelter at Tuas. Willy was also found with an empty stomach, indicating that she was highly stressed at that point in time.

Willy’s body was later buried at Lorong Halus in Tampines. Her lower jaw with ten intact teeth was salvaged and preserved and used as an educational display at UWS.

What does this represent for us at the Lee Kong Chian Natural History Museum (LKCNHM)?

The donation represents another important and key addition to the mammal collection at LKCNHM. With the accession of this false killer whale specimen found locally, the mammal collection has been further expanded and we believe, would add to our knowledge of cetaceans in Singapore waters.

We hope that the evidence of the wonderful marine life in our waters will further serve as a reminder for future generations to treasure the rich marine biodiversity that surrounds our little red dot.

For more information on the story of Willy, you can find it at the Nature Society Singapore’s newsletter, The Pangolin, Volume 7, 1994.