In this feature, we give a short summary of the work of two mammalogists that have visited the museum a while back.

Mr. Lim at his workstation in the LKCNHM research lab. Photo by Clarisse Tan.

Mr. Lim Tze Tshen is a research associate at the University of Malaysia, focusing on biodiversity conservation and vertebrate palaeontology.

As a palaeontologist, Mr. Lim studies fossils, from common ones such as the fossils of wild pigs, to rare ones like gibbon fossils.

Last year, a gibbon fossil that is estimated to be around half a million years old was found in Peninsula Malaysia. It was initially difficult to identify, but they were able to identify it as a gibbon fossil by comparing one intact tooth present in the fossil with existing gibbon dental records.

But there is another question – what species of gibbon is it?

In order to answer this question, Mr. Lim was here to examine the morphology of gibbon skulls in the Zoological Reference Collection (ZRC), and compare it to the gibbon fossil, in order to identify its species. During his 4-day visit, Mr. Lim examined around 120 gibbon skulls from the ZRC, and found the answer to the mystery. We wish Mr. Lim all the best for his next fossil adventure. 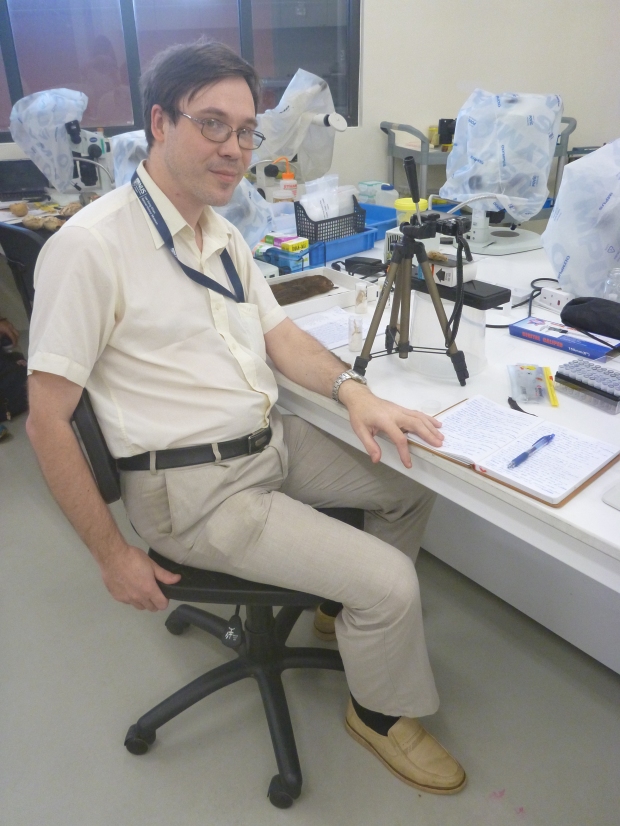 Dr. Balakirev at his workstation in the LKCNHM research lab. Photo by Clarisse Tan.

Dr. Alexander Balakirev is a mammalogist from the Severtsov Institute of Ecology and Evolution at the Russian Academy of Sciences, with a research focus on small mammals such as treeshrews and rodents.

Why small mammals in particular? Dr. Balakirev jokes that as he does not have the sharp eyesight to peer at tiny insects and extremely good physical endurance to chase after large animals such as wolves, research on small mammals is just the right fit for him.

P.S. Dr. Balakirev, along with two other co-authors, recently published a research paper in the Raffles Bulletin of Zoology, describing a new species of marmoset rat from southern Vietnam (click here to read).